From Maxis to Minis and every skirt in-between

If there is one type of clothing that has had a rich history through the ages, it is most definitely the skirt. From the straw-woven skirt dating back to 3900 BC in Armenia up to the array of maxis, midis and minis (and everything in between) available nowadays, skirts have dominated women’s wardrobe. Despite starting as a standard garment for both men and women in all ancient cultures such as Asia and Egypt, the skirt went on to become a wardrobe essential for women in Western Europe and the Americas. Here we take a deeper look at the fascinating history of skirts – from their early beginnings to the styles that have become firm favourites among women of all ages. 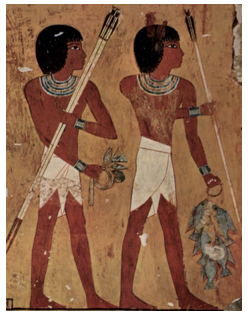 The skirt goes back centuries in Ancient Egypt. Curiously the first ‘skirts’ were actually worn by men. These simple garments were similar to a wraparound skirt that was belted at the waist, called the Shendyt. This skirt was made from locally sourced materials, which in this case, was flax (linen). It was lightweight and airy, ideal for Egypt’s hot and humid weather. The richest and most influential people wore lighter and thinner skirts, while workers and labourers wore – mostly – cotton loincloths. The women, on the other hand, preferred dresses. They were floor-length and mainly white. As with the men, the lower the position in society, the cheaper the fabric.

Skirts in the Middle Ages

During the Middle Ages with the advances in weaving and tailoring, it was possible for men to start wearing tailored trousers and tights. We see a departure from this type of garments for men, as their tastes turned to tunics and hosiery.  For women dresses were still very much the staple clothing choice. These were cut to follow the lines of the body up to below the waist with a separate, fuller skirt sewn to the bodice. Dresses were worn by women at all times up to the late 19th century, when separates started to make their appearance. 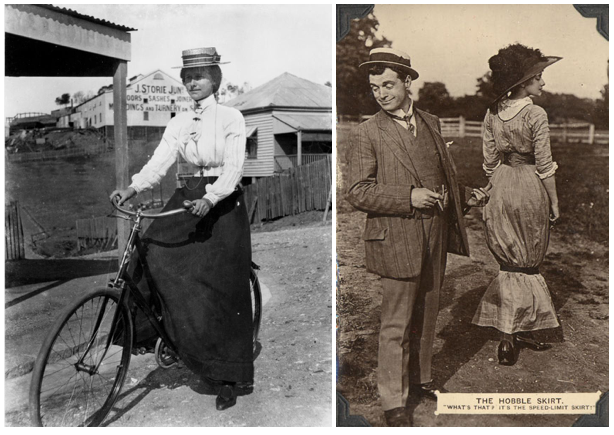 During the Victorian era, dresses were still dominant and clothing etiquette was very strict. Dresses covered the whole body and corsets and bustles were essential in the early Victorian era woman’s wardrobe. However that began to change in the late 1890s, when women adopted a more active lifestyle, with riding, cycling and walking. During the early years of the Edwardian era, separate jackets and skirts were all the rage, making the outfits less restrictive than the previous austere Victorian period. From 1886, skirts became less trimmed, while their drapery fell in plainer lines.

From the 1890s onwards, the popularity of the skirt as a separate piece of clothing really grew and gained momentum.  During this time stuffy full-length dresses were exchanged for more practical garments. However, skirts still hit the floor and that continued until the 1910s, with the hobble skirt. 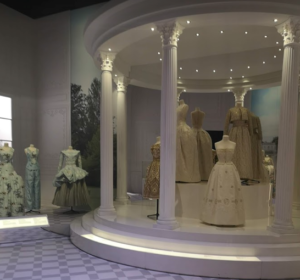 The 20th century was a time of experimentation and innovation in many aspects of society. The skirt definitely developed during this period with a wide variety of new skirt lengths and types. While skirts were full-length in the beginning of it, by the end of the century we had a wide assortment of skirt types introduced. From the hobble skirt in 1910s to the mini skirt of the 1960s, the skirt evolved a lot during this era.

During the Roaring Twenties, hemlines began to rise and flapper style influenced women in the western world. The hem length rose to just below the knee in the middle of the decade, allowing flashes of leg to be seen when women were dancing or walking. However, things changed once more after the Great Depression, when hemlines again dropped to mid-calf to floor-length and outfits became more modest.

In the 1940s, skirts (and outfits in general) became even more sombre in nature, with all the restrictions in clothing during the Second World War. Utilitarian fashion was the go-to look, while cheaper fabrics gained ground and simple A-line or straight skirts were in demand. During the 1950s, fashion returned to its more extravagant roots, with Dior and his “New Look”. Voluminous skirts with his A-line look, and pencil skirts in Dior’s H-line were adopted by women in the western world.

The true revolution though happened in the next decade, in the 1960s, with Mary Quant’s miniskirt. For the first time, women were given the freedom to choose the length of their skirt but the mini length was there to stay! From that time onwards, miniskirts were part of many women’s wardrobe, with only the exception during the 1970s and the hippie fashion, when peasant skirts with longer hemlines were introduced.

Since the 1970s and until now, not one type (and length of skirt) has dominated fashion for long, with mini, short and ankle-length styles appearing side by side in the high street. 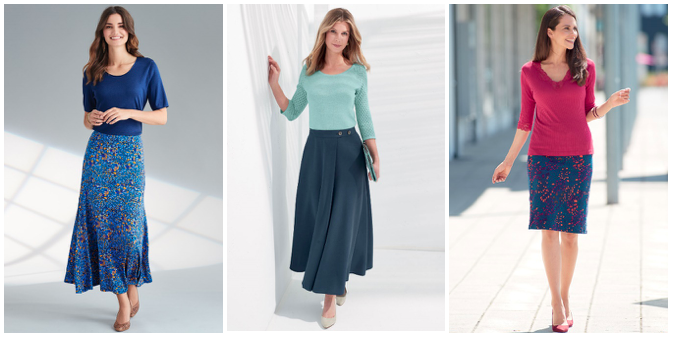 For us, skirts are a necessary part of the wardrobe and we love designing them. From A-line midis to maxi skirts, and from pencil skirts to faux wrap ones, we think that a skirt can do wonders for any woman’s outfit. Complementing your figure, or hiding your weaknesses and highlighting the parts of your body you want, it’s your choice to find your own style!

If you are interested in the history of fashion and clothing, then check out these fascinating blogs:

The Iconic Pencil Skirt and Its Origins

The History of the T-shirt