Have you ever wondered how your pyjamas, nightdresses or dressing gowns came about? Without them, our nights would be all the more uncomfortable, let alone colder. A nightly essential, or a fashion statement, from pure silk or cotton, nightwear plays an important part in our wardrobes. Here we give you a brief nightwear history and talk about how Patra nightwear is the perfect mix of style and functionality.

The origins of Pyjamas

The word “pyjamas” is derivative from the Persian word “paejama”, meaning leg covering. They were worn in the East as standard attire, but were introduced in Britain during the 17th century as lounging garments. In fact, pyjamas owe their increasing, global popularity to the British.

It will come as no surprise to learn that originally pyjamas were predominantly worn by men. Around the 1890s, pyjamas started to replace the night-shirt for the men and by the 1930s they became a staple of men’s wardrobes. Back then pyjamas were made from cotton, flat or brushed. They were not considered proper for women to wear, because they showed their bodies. That changed in the 1920s when Chanel introduced the lounging pyjamas for women that was an instant hit. Made from high-quality silks and more tailored in appearance, these ladies’ pyjamas won women over. The 1934 romantic comedy It Happened One Night also helped spark a craze new for pyjamas.

By the 1940s, men still wore cotton pyjamas, while women started wearing “baby doll” pyjamas, which consisted of a sleeveless top with frilly hem and frilled shorts. Lace and puffy sleeves were incorporated, while lightweight silk and cotton were used. This change of style continued until the 70s when Asian influences became a part of ladies’ and men’s pyjamas. Nowadays pyjamas can be made from a variety of fabrics – from simple cotton to luxurious silk. There are also a wide range of styles available, so you can choose from more traditional sets with a jacket and pants or a modern one with short sleeve pyjamas, capri pyjamas or even onesies. 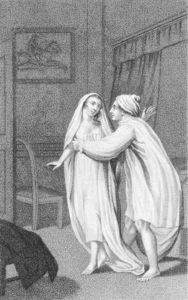 Nightwear cut as the male shirt or female shift have been used for centuries. They were bulky and shapeless, but still offered vital protection against the elements. Made from white linen, they could be bleached and boiled and were subjected to heavy use. They remained relatively unchanged as the centuries passed, until the 19th century, when nightgowns became more tailored and stylish, by adding yokes, collars and cuffs. However they were still long, mainly made from cotton and most often white.

Pyjamas entered the feminine nightwear wardrobe in late 19th century, but long nightgowns were still fashionable. In the 20s and later, nightwear became increasingly more colourful and diverse, responding to fashion directives. Ruffles and lace, a variety of luxury natural fabrics and synthetics and a variety of lengths, mean that the traditional nightgown is here to stay. What better to wind down in the evening than a soft and comfortable nightgown in natural fabric? 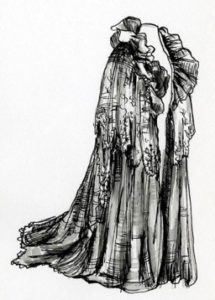 Like pyjamas, dressing gowns were influenced by Middle Eastern and oriental cultures. Initially they were colourful coats, meant to be worn by men inside their homes, made from natural fabrics, such as silk, cotton and velvet. By the 19th century, they were worn equally by both sexes, over their night shirts and nightgowns, without losing the rich fabrics. Men had longer dressing gowns, while for women it was an escape from the tight confines of their corsets. Back then, a dressing gown was also used to protect a lady’s clothes from hair powder while she sat in front of her vanity mirror to get ready.

The concept of the dressing gown lasted until the 20th century, when hostess dresses and robes were introduced to the wider public. However as more women entered the workforce and the idea of sitting around the house with a dressing gown was no longer applicable, dressing gowns lost their appeal. It was only in the later decades of the 20th century that wearing something comfortable at the end of the day gained traction and it is still an issue of comfort, quite like those 19th century women. 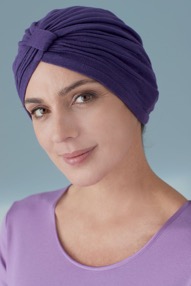 This was the best thing to keep one’s head warm, especially when bedrooms were not heated during the night. Then again, nightcaps were not used only just to sleep. For example, during the Victorian times, if a lady had to wake up early and meet people, she would wear her nightcap with her dressing gown to breakfast. Fast forward to the 20th century, women would style their hair once a week and wearing a nightcap would preserve the hair style.

Our updated version of a nightcap is our pure silk turban. No more bad hair days or medical conditions will stand in the way of a good night’s sleep. Our turbans can be worn outside as well, so more points for versatility!

Natural nightwear for a blissful sleep

Patra’s nightwear range is utterly comfortable without compromising on style. Sumptuous silk, low-maintenance cotton and soft bamboo are all part of our nightwear range, so that no-on will be left wanting. Our pure silk pyjamas and dressing gowns, cotton and bamboo blend pyjamas and nightdresses are breathable and kind next to the skin. By keeping you warm in winter and cool in summer, our nightwear can ensure that you have a luxurious and peaceful sleep.