A treacherous journey that shaped the modern world 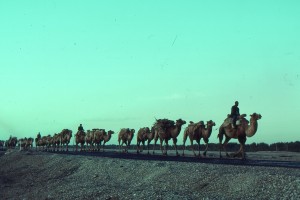 The Silk Road played a major part in the cultural and economic development of both Europe and Asia. This brutal route over land and sea transported far more than packages of fine silk. It was used to trade all manner of goods, from Roman gold and silk, to salt and sugar, and a plethora of ideas and philosophies were also exchanged along the road. It became a major artery that pumped innovations and cultural developments across much of the settled world.

What was the Silk Road? 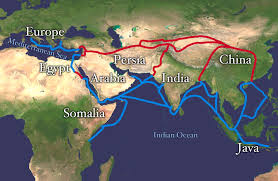 Its name is deceiving – it was not a single, paved path but a series of dangerous trails through deserts, over mountains and across seas. This trade route went from China to Eastern Europe, across thousands of miles of desert, steppe and mountain ranges. Ultimately it arrived at the Mediterranean – where later maritime links made connections to other parts of Europe and North Africa.

These amazing trails were begun during the rein of Chinese Emperor Han Wudi of the Han Dynasty, sometime between 156 – 87 BC. Although there was already some trade between China and the rest of the world before this time, the Emperor was keen to expand the silk trade. The Road was a success and the trade of silk and other goods significantly increased during the Han Dynasty. Later the Great Wall of China was extended to ensure the protection of goods that travelled along this important trade route. Trade along the Silk Road reached its peak during Kublai Khan’s Yuan Dynasty. The Mongols were a force to be reckoned with and were able to control large sections of the route, allowing merchants to travel in greater safety.

The road was around 4,000 miles long but no trader ever made the whole trip. Instead, a type of relay system took place, whereby a merchant would travel for a while, make a trade and then return home. The next merchant would do the same and slowly goods would travel vast distances. The main reason for this relay was the incredible dangers faced along the way. The mountains were treacherous, the desert arid with wild sandstorms and the snakes and other wild animals could be deadly.

On top of nature’s obstacles there were pirates, bandits and disease. Merchants would travel in caravans, in hopes that being part of a large group would be safer than travelling alone. The sure-footed camel was often used as a means of transport because much of the path was so harsh and dry.

How did the ‘Silk Road’ get its name?

Silk was being traded long before the Silk Road became a significant trade route. The ancient Romans loved this wonderful and mysterious fabric but did not know were it came from. Demand increased and they sent scouts out to find these ‘silk people’ and most never returned. They realised that, if they could not find and conquer them, they would have to trade with them. So the people of Asia and Europe were able to get their prized cloth from the ‘land of Silk’ and the path across the continent began to grow in significance.

As the route became more established, more items would be traded along it. The Chinese exported porcelain and teas as well as salt, sugar and spices. There was also popular trade in many luxury goods such as gold, silver and ivory.

For over 2000 years, so much has travelled along this route, from the Bubonic Plague to the purest handcrafted silk. Civilization began to appear amidst the barren wasteland – temples and even cities were built. Although it never became an easy journey to make, it was one that shaped the world we live in today.