Where does the phrase ‘taking silk’ come from?

For many barristers becoming a member of the Queen’s Counsel is the ultimate goal. The status of a QC not only has formal privileges and great financial rewards but also brings with it the enormous prestige of belonging to a select circle dating back to Elizabethan times. 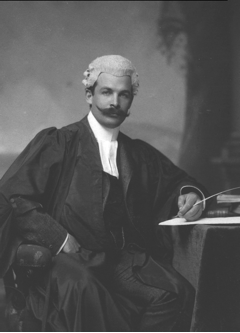 Members of the Queen’s Counsel are often referred to as ‘Silks’. It is believed that this term was first coined in around 1810 and is in reference to a QC’s silk gown. When a barrister becomes a QC their uniform changes as well as their title. They upgrade from a plain black gown to a shiny silken one. Only QCs can wear a silk gown, it is this privilege that make them recognisable in court and from which the phrase ‘taking silk’ derives.

The emergence of the Queen’s Counsel during the late 16th and early 17th century was during a time when silk was a rare and expensive commodity, one often associated with royalty. James I was particularly fond of it and keen to exploit its production throughout the colonies. Therefore, it is hardly surprising that the king’s preferred barristers would be dressed in his favoured fabric.

QCs are appointed annually by the Queen. In 1775 the first English Law list stated that approximately 8% of barristers were QCs. Amazingly in 2010 the proportion was almost identical even though there are now over 12,000 registered barristers compared to the 165 who existed in 1775.

The History of the Queen’s Counsel

At the end of the 16th century an office, described as ‘the Queen’s Learned Counsel’ was set up. This group helped law officers conduct crown prosecutions.  Formerly this job had been conducted by the king’s Sergents.

In 1597 Sir Francis Bacon, who was the Solicitor-general at the time, became the first Queen’s Counsel ‘Extraordinary’. He was given a special patent which gave him precedence at the Bar. In 1603, during the reign of James I, Bacon formalised the King’s Counsel, giving the title’s holders more influence within the system.

During the 17th century the role slowly evolved to have greater function and significance within the court system. Prior to their introduction the most important type of law official were the king’s Sergents. But they gradually became obsolete as the standing of this new post grew.

During the 1900s the public began to recognise the importance and power of the Silks. They took over privileges previously held by Sergents and their status rose even further.

By the late 19th century QCs began to be seen in official law reports. Being elected to the Queen’s Counsel had become universal practice and Silks could be found in many countries with the British Empire.

During this time reforms were made to the responsibilities held by members of the  Counsel. To begin with there were constraints as well as benefits to being a Silk. KCs and QCs were not allowed to draft pleadings or appear in court without the assistance of a junior barrister and they had to have their chambers in London. But by the end of the 20th century these and other constraining stipulations had been abolished.

The Queen’s Counsel had come under a lot of criticism due to the highly secretive selection process and their vastly disproportionate earnings. In 2003 the election of new QCs was suspended and many assumed it would soon be abolished. However in 2004, after much protest and debate, the election of the Queens Counsel resumed but with new reforms. These tried to create greater equality and transparency.

Today the Queen still annually appoints barristers to become part of her ‘Majesty’s Counsel learned in the law’ and gives them the right to wear a black silk gown. And being a Silk is just as sought after as ever before. The financial gains alone are quite eye-watering, with some QCs demanding fees that generate seven figure salaries. But it’s more that just the money, becoming one of around 1000 Silks practicing today and adding those precious two initials to your title gives you status and privilege that most in the legal profession will only dream of.