Although a lot has changed since we arrived in May 1964, both in terms of fashion and the wider world, our ethos and passion have remained: to deliver high quality, all natural style to our customers. So as we celebrate our golden jubilee, we thought it would be fitting to take a look back at the last 50 years – the fashion and world events that have shaped this last half century. 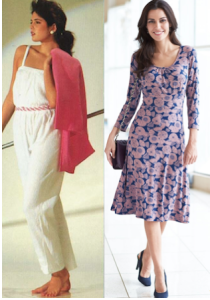 Patra Selections then and now

The 60s: it was an era that saw society break free from many of the rigid constraints of the previous decades. It was a time of greater choice and rapid change. John F Kennedy became President, Martin Luther King Jr. gave his ‘I have a dream’ speech and the Cuban Missile Crisis also took place. 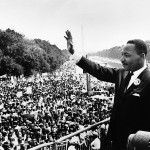 Fashion mirrored these social changes; it became more daring and more liberated than ever before – hem lines rose and underwear was burned. Mary Quant invented the mini skirt, the bikini became available to buy and midriffs went on public display.

By the late ’60s, London was the fashion capital of the world. A walk down Carnaby Street, full of crushed velvet, frilled collars and go-go boots was like strolling through a living catwalk. With the easy going feeling sweeping the country we started selling ‘door to door’ richly coloured dresses and traditional India Kurtas to local Hampstead boutiques. 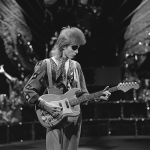 The 1970s saw social and political change. Culturally, it began with the Beatles breaking up, saw Elvis die and ended with the invention of the Walkman.  It also saw massive political unrest. Britain suffered the oil crisis and the three-day week. The US had the Watergate scandal and wars in Cambodia and Vietnam raged on. 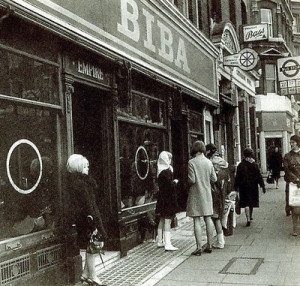 Seventies fashion was influenced by the music of the decade – although the hippie look was still common – artists like David Bowie and Marc Bolan made glam rock popular. The fashion label Biba became synonymous with this style and brought it too our high streets.

Then Saturday Night Fever took hold – three-piece suits with extra wide collars became fashionable and woman started wearing leotards on the street. Matching the trend to a more sophisticated look we imported our first silks from China. The hand embroidered detailing was unbelievable – if you’ve managed to keep one, hold on tight it will never be matched. 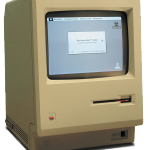 The 1980s was a time of industry and economical liberalisation, of multinationals and huge technological advances. Computers and video games became commonplace with the help of companies like Nintendo, Commodore and Macintosh.

It witnessed deep unrest in the Middle East, with war in the Lebanon, Iraq, Libya and the West Bank. This decade also saw Ronald Regan become President and the Berlin wall come down. 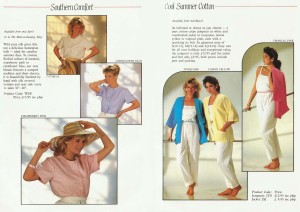 In fashion everything was bigger and tighter than ever before. Big hair and lots of Lycra were everywhere. Madonna and movies like Flashdance saw dance clothes hit the streets – leggings, sweatbands and slouch socks were all the rage. The influence of shows like Dallas made power dressing popular. Career chic was a look that involved silks, leathers and, of course, big shoulder pads.

The way people purchased the latest fashions was also changing, although the high street still dominated niche retailers were starting to test mail order and our first catalogue was born. 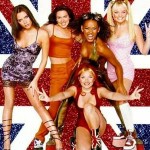 This decade could be described as a communication revolution. The rise the mobile phone, the Internet, email and instant messenger would change the way chatted forever.  Personal Computers, Microsoft’s introduction of Windows and the CD-ROM changed the face of home computing.

The nineties saw a major breakthrough for Northern Ireland with the Good Friday Agreement. But violence continued elsewhere with fighting in the Congo, Chechnya and the Gulf War. 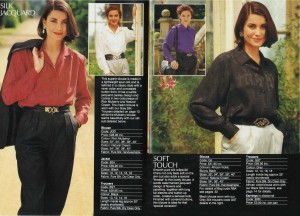 Again music would influence fashion, from Grunge to Rave and Hip-hop – whatever your musical preference there was a look to match. Bands like Nirvana made scruffy flannel and acid washed denim commonplace. America’s influence saw sportswear brands Nike and Reebok surge in popularity, as too did bomber jackets, baseball caps and sweatpants.

Fashion started its drift from seasonal trends, which continues to this day, and our love for silk continued with a broader range that included thermal underwear, lingerie and bedding. 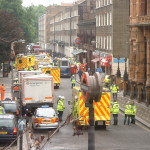 The ‘naughties’ was a decade of globalisation, the Internet made exchanging ideas far faster and easier than ever before. But it was also time of terror, beginning with the Twin Tower attacks on 11 September 2001 and continued with terrorist bombings all over the world including Bali, Madrid and London. 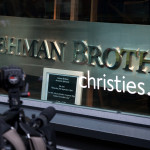 This era suffered a huge financial crisis, when the American housing market collapsed. This caused closures of US banks and rippled through to cause a global recession.

In fashion the 2000s looked back to the past, taking inspirations from the last six decades. Boho-chic made vintage ’40s and ’50s clothes cool again and ’80s style skinny jeans had a big comeback. This ‘mash-up’ of looks meant that it was a decade built from recycled style rather than innovative fashion. 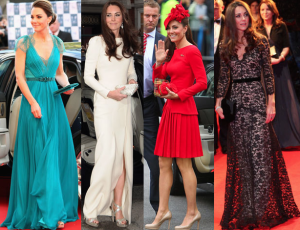 Duchess of Cambridge – fashion icon of the 2000s

With the face of the world and fashion constantly changing we’ve moved with the times and seen many major changes. We remain committed to quality and silk and like to think we have introduce just that little bit of affordable luxury in to people’s lives. As we celebrate this milestone we’d like to say thanks – we couldn’t have done it without you.